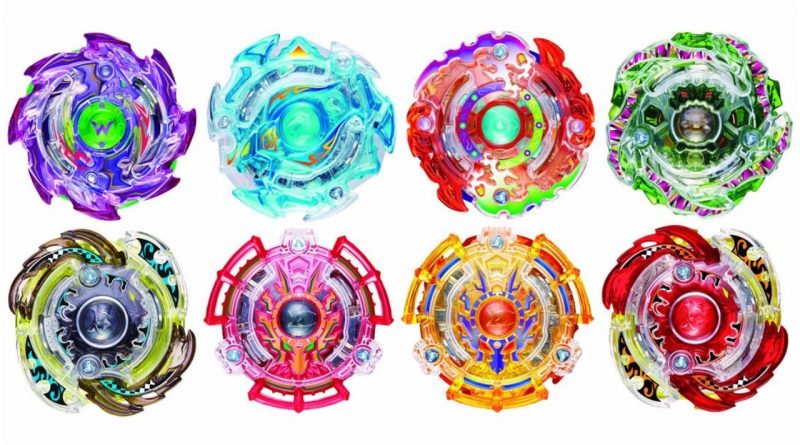 The more you get into Beyblade Burst, the more time it takes to make a cool bey. Working out which parts to use is hard, yo. There are so many! Mix them all up, and that’s thousands of possible combos to consider.

We’re relative Beyblade newbs over here. And there’s a lot to take in. That’s why we tried picking bits we like, from the huge number of choices for each layer.

Keep in mind not all our choices are the most competitive. Every part has strengths and weaknesses we might not cover. Yeah, Beyblade Burst is a game, a battle between Bladers. (And it gets intense…) But you gotta have fun with it, y’know?

Seen by many serious Bladers as outranked by newer layer releases, but we like the Egyptian god design. That’s an eye-catching way to top off a Beyblade. And hey, if nobody else is using it then our blade’s easier to spot.

Anubis was the god of… mummification and the afterlife. Protector of tombs, embalmer of dead people, guide for the soul. Hey, that’s a pretty cool backstory.

That name! It should be the most killer energy layer in the whole game. Hell, it looks threatening. The Grim Reaper, holding a scythe up. Glaring at you with those yellow eyes. He’s coming for your beys.

The scythe ‘blades’ are designed for attacking, and for getting your opponent’s Beyblade to burst. The clear blade’s meant to slide, for ranged and targeted attacks. So this layer does a lot. Some people don’t love the recoil, but if you wanna psych out your rival we think it’s fun.

Like other forge discs, 8’s design features the number. And it’s symmetrical, to match the other even-numbered ones. What do we like about 8? Well, turn it sideways, and the bigger, chunkier 8s around the edge look like ‘infinity’ instead. Reach for the stars!

The discs are all designed well, for parts that aren’t so visible when the Beyblade’s complete. We don’t just mean for balance and stability – the end results look good. Sure, you’ll see it if/when it bursts… except nobody wants their own bey to do that…

‘Heavy’ is the forge disc used in many competitive Beyblades, helping with weight and gravity issues. Symmetry gives the disc’s weight even distribution, for balance, and the design looks nice and sturdy. The finishing touch is the embossed ‘H’ on each side.

Weird fact: for a while, Heavy was the heaviest forge disc, but now it’s not. At least 2 newer discs weigh more. Oh well, it’s still in the top 3. And it’s still heavy, if not the most heavy of them all. You can still get results with this disc, as shown by its popularity at tournaments.

We expect great things from something called ‘God Performance’, and so should you. The Atomic tip can be found in a few different colours – you’ll recognise it by the shape. (Remember: performance tips are also known as ‘drivers’ in Japanese, when you’re searching for them.)

If you trust Burst stats, the highest stat on this tip is ‘defense’. The official numbers are (sadly) known for not being all that accurate. It’s seen as weaker against knock-outs, unless you’re using a heavier Beyblade overall. That said, Atomic’s still seen as a great base for spin equalising and balance builds.

Alright, this Beyblade stadium pre-dates Beyblade Burst, it’s an exception. It dates back to Beyblade: Metal Fusion. But a stadium’s a stadium, if you’ve got 2 Bladers waiting to battle. And that’s a super vortex you’re looking at.

A small and tall, circular design gives offensive beys the advantage. No pockets get trapped in, nowhere to hide. It’s harder to be knocked out of the arena. (Unless you’re using the design with drops.) And smashing your opponent into the walls could stop their momentum.

It looks like a sword. Launching a bey is like pulling out your sword to do battle. What more should we say? That’s a kickass design.

A lot of how well a Beyblade launcher works is down to how well you pull. With help from the launcher shape and style, of course. Some launchers are made for power, some are made for better control.  The sword launcher’s meant to be fast, if you get the technique down. And you’ll feel like a warrior when you do.

DEJAPAN’s where you can find Beyblades, Burst parts, and Bey Stadiums. You might see battles for pre-owned Beyblades and parts on Yahoo! Auctions… so why not check out Amazon Japan and Rakuten, too?

4 thoughts on “Spinning with bey: we pick Beyblade Burst parts”